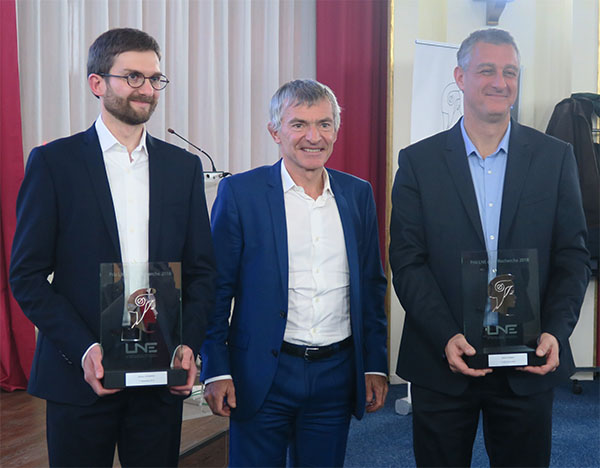 On Tuesday 17 December 2018, on the occasion of the 10th anniversary of its Research Prize, LNE awarded Wilfrid Poirier and Félicien Schopfer for their major work in electrical metrology.

The award of the 2018 LNE Research Prize coincides with a historic event in the world of metrology: the revision of the International System of Units (SI). Thanks in particular to the work of the winners, the LNE played a major role in the redefinition of the SI voted in November 2018.

Wilfrid Poirier and Félicien Schopfer have worked on the application of the quantum Hall effect in fundamental metrology with significant results, ranging from record universality tests to the development of a programmable current generator that will allow the ampere to be used with unparalleled accuracy, to the development of a quantum standard of graphene resistance operating under unprecedented simplified experimental conditions.

Created in 2009, the LNE Research Prize has in turn rewarded researchers on themes and subjects as varied as nanotechnologies, health, the environment, telecommunications, energy, transport, information technologies and materials. Over 10 years, the LNE has rewarded more than fifteen researchers who have all succeeded in combining science and pragmatism, for research work with a strong impact on science, industry and society.