The marketing of thermal insulation systems applied from the outside requires a performance certification as regards fire propagation. Each European country however has developed its own full-scale testing facility (LEPIR II in the case of France), which hinders market access for industries involved in this sector. Numerical simulation allows comparing the various test benches within the scope of a European standardization campaign, while at the same time offers an alternative to repeating the LEPIR II test protocol, which remains rather costly to implement.

Residential fires may have very serious consequences (257 deaths and 962 victims requiring medical treatment in 2015 according to the 2016 DGSCGC Agency report). In the event of a fire outbreak inside a building, its propagation either laterally or to higher floors via the building facades constitutes a well-identified risk. The reliance on External Thermal Insulation Composite Systems (or ETICS) to satisfy the objectives set forth in Thermal Regulations (TR2012) could, in some cases, exacerbate this risk of fire propagation via the facade.

In France, Technical Guideline No. 249 lays out the safety regulation requirements to mitigate the fire risks relative to facades, specifically for facilities that receive the general public, residential structures and high-rise buildings. Commissioning the test known as LEPIR II (acronym for Experimental staging of two-story fires) to certified fire reaction and/or resistance laboratories has been mandated so as to evaluate the fire behavior of materials and qualify building systems relative to this risk under actual use conditions. Yet no technical standardization has been introduced from an international standpoint to assess fire safety relative to structural facades, even though a standard had been established on this specific topic (ISO 13785-1&2). Each country therefore employs its own benchmarking and testing methodology (e.g. BS 8414-1 in the United Kingdom, SP Fire 105 in Sweden, DIN E 4102-20 in Germany) using completely different source terms, test bench designs and even criteria for success. All of these aspects may exert an impact on the outcomes obtained as well as on the level of compliance for the building solution under review.

A standardization campaign has been initiated over the past few years at the European level via EGOLF (European Group of Organizations for Fire Testing, Inspection and Certification), with the determination made to propose a European protocol for evaluating the fire resistance behavior of facade materials and building solutions under actual use conditions. Given the considerable cost associated with conducting a facade test, an experimental inter-comparison campaign among the various European approaches remains a rather complicated task. In this context, numerical simulations appear to offer an attractive alternative.

LNE has applied its expertise in the field of Fire Safety Engineering (FSE) to compare the various European test benches according to myriad configurations, based on an adapted numerical fluid mechanics software aimed at treating fire-related problems (using a fire dynamics simulator, or FDS). The objective here is to identify possible correlations between the LEPIR II test and the main European approaches, and then to set the application boundaries.

This study is assigned to position the LEPIR II test with respect to existing tests by means of predicting both the thermal loading from the flame and the damaged surface area. The influence of both source term and design on the thermal attack of the flame has been investigated in order to deploy FSE techniques as a complement to the LEPIR II test in response to a request calling to expand the scope of application of a given building system.

257 deaths and 962 victims requiring medical treatment in 2015 according to the 2016 DGSCGC Agency report. 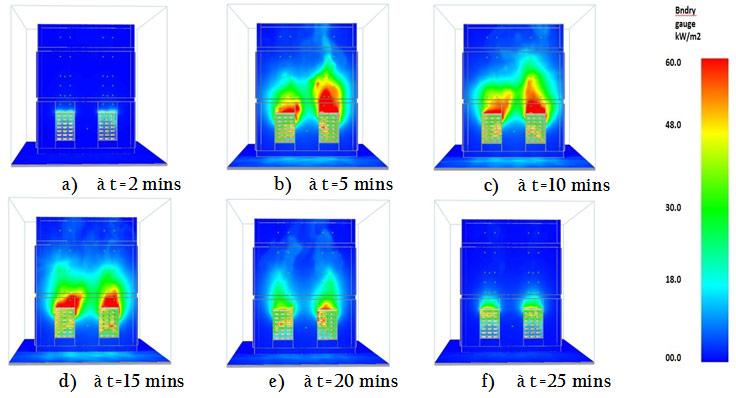