The LNE advocates gender equality in all its activities and at all levels of responsibility, including traditionally male-dominated fields (e.g. mechanical and electrical engineering). Under the French law on the freedom to choose one's professional future of 5 September 2018, LNE has adopted a proactive stance aimed at measuring its progress in terms of professional equality by aggregating several indicators.

Evolution of the gender equality index 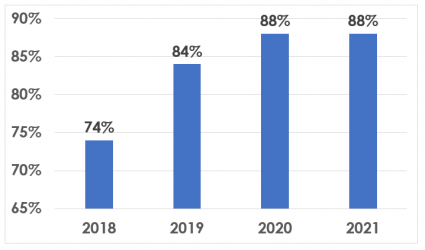 The figures presented below are expressed in points.

Gender equality figures in 2021 at LNE

After the implementation of the first remote work agreement in 2016, enriched in 2018 with a new flexibility and individualisation of working time, we now have:

Appointment of equality and diversity officers

In 2021, the LNE trained HRD staff (Human Resource Department) in charge of recruitment in non-discrimination on recruitment in order to encourage the recruitment of women in all LNE professions. In addition to the gender equality index, the social balance sheet and its gender equality report, which are published annually, since 2017 the LNE has been monitoring an indicator for the representation of women in the main managerial positions (director / division manager / department manager) as part of its Contract of Objectives and Performance (COP) negotiated with the State. Since 2019, the LNE has appointed a harassment and sexist harassment officer and a disability officer to guide, inform and support employees in the fight against sexual harassment and sexist harassment or in a disability situation.

Our actions for equal opportunities 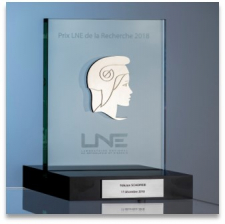 The LNE Research Award was created in 2009 to reward researchers who have contributed to the success and scientific reputation of the French Metrology Network and LNE's own research activities.

Since 2009, LNE has rewarded more than twenty researchers who have combined science and pragmatism for research work that has had a strong impact on science, industry and society. 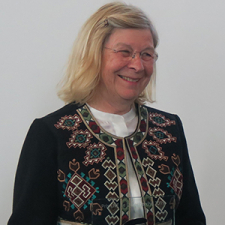 Marie-Christine LÉPY is a research director at the Commissariat à l'énergie atomique et aux énergies alternatives. In 1982 she defended her thesis at the University of Caen and became a doctor in nuclear physics. In December 1984, she joined the Laboratoire National Henri Becquerel (LNE-LNHB/CEA) in the gamma spectrometry group.

In 2019, Marie-Christine LÉPY was rewarded the LNE Research Award for her work on optical radiation and ionising radiation.

Séverine DEMEYER is a research engineer in statistics applied to metrology in the Data Science and Uncertainty Department of LNE and received in 2019 an "Outstanding Reviewer Award" given by the journal Metrologia to about ten experts from all fields to reward their active contribution to the quality of the Journal through the excellence of their reviews.

Her research activity is mainly carried out in the framework of European (H2020, JRP,...) or national (ANR,...) projects, in the fields of energy, environment, health,... She co-supervised with CentraleSupelec the Rémi Stroh thesis defended in 2018 (IAFSS prize, GDR Mascot-num prize). 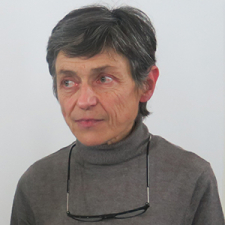 In 2007, Jocelyne GUÉNA was given the LNE Research Award for her work on time-frequency.

Jocelyne GUÉNA has worked for several years at the Observatoire de Paris on the development and use of these primary time and frequency standards. In particular, she has contributed to the implementation of a unique set of atomic fountains and has developed methods and means that have led, for more than 10 years, to an exceptional availability of time-frequency standards with optimal accuracy. 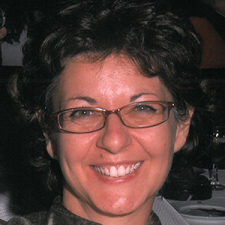 Paola FISICARO has a doctorate in chemistry and was recognised by the LNE Research Award for her research in inorganic chemistry and electrochemistry, which she has been carrying out since 2007 with a multidisciplinary team in response to analytical challenges applied to environmental and biomedical issues.

For several years, she and her team have been highly involved in the development of metrological references for the measurement of ocean acidification, a determining parameter linked to the phenomenon of climate change.
Paola FISICARO is also involved in the determination of metals and the characterisation of metallic nanoparticles in various fields, from health to the environment and food.

A research engineer at Laboratoire National Henri Becquerel, Marie-Martine BÉ was responsible for the "Atomic and nuclear data evaluation" activity.

In 2011, Marie-Martine BÉ was awarded the LNE Research Award for her work on radionuclides.

In this capacity, she made a major contribution in the development of the Radionuclide Table. Since 2004 this Table, unique in the world, has been published as a Monograph with the support of the BIPM and used as a reference for the measurement of ionizing radiation.

Marie-Martine BÉ has also been Vice-President of the ICRM (International Committee for Radionuclide Metrology), leader or member of various international working groups within the ICRM, the IAEA (International Atomic Energy Agency), and has contributed to many European projects.

A specialist in gamma spectrometry at IRSN's Environmental Radioactivity Metrology Laboratory, she received the LNE Research Awardin 2021. She is working on improving the means and methods for measuring trace radionuclides, in terms of sensitivity and speed. This work has focused on passive or active background reduction methods (anti-cosmic or anti-Compton vetoes), and on the development of gamma-gamma coincidence measurements of environmental samples (Hugues Paradis thesis 2013-2016).

Since 2017, her new field of interest is the development of gamma spectra analysis algorithms and augmented expertise valorising environmental monitoring measurement data (Jiaxin Xu thesis 2017-2020 and Paul MALFRAIT thesis since 2020).