Press releases
Print this page
Back 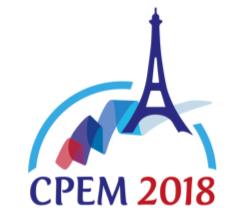 This event is the most important scientific and technological conference in the domain of electromagnetic measurements at the highest accuracy levels. For the first time in 26 years, France will host the prominent event with a focus on the future revision of the International System of Units.

The field of electromagnetic measurements answers numerous present and future challenges regarding industry and society in sectors such as Energy, Information and Communication Technology (nanomaterials, internet of things …), quantum engineering, Industry 4.0, etc.

The most important conference in the domain of electromagnetic measurements

More than 500 scientists, from national metrology institutes as well as researchers from university laboratories, from industrial and government standards laboratories and representatives of manufacturers, will gather from July 8 to 13 july, at Maison de la Chimie, to share knowledge on research in electromagnetic metrology. This prominent event is held for the first time in 26 years in France and is once again organized by LNE.

2018 is expected to be a watershed year in the history of the international system of units (SI), with the adoption of the new definitions for the kilogram, the ampere, the kelvin and the mole. All the SI units will then be based on a set of seven defining constants. CPEM 2018 will provide a privileged opportunity to mark this milestone of the SI through a natural focus on quantum devices that relate electrical measurement standards to fundamental constants of physics.

The organization of an event of international stature as CPEM, which brings together more than 50 nationalities, testifies once again of the LNE’s position as one of the most important research organization in metrology in the world, and even more so in electrical metrology. It is thanks to the work of its researchers in electromagnetic that LNE is one of the major players in the kilogram and the ampere revision, set to novembre 2018.