General Conference on Weights and Measures 2022

The 27th General Conference on Weights and Measures (CGPM) was held from 15 to 18 November 2022 at the Palais des Congrès in Versailles. It brought together delegates representing the States Parties to the Metre Convention and Associates of the CGPM. 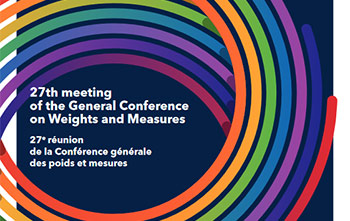 Chaired by Professor Flandrin of the French Academy of Sciences, the 27th General Conference on Weights and Measures (CGPM) was opened by Thomas Grenon, Managing Director of the LNE, on behalf of the Government of the French Republic.

Thomas Grenon also recalled France's major role in the Metre Convention treaty and stressed the importance of metrology in the economic, societal and environmental fields as the changes taking place in this discipline.

Resolutions to respond to changes in our world

This edition underlined the importance of the subject of opening up the SI in the digital age. As a concrete illustration, the resolution of new multiples and sub-multiples of SI units  to meet needs of data science in the near future to express quantities of digital information using orders of magnitude in excess of 1024, has been adopted.

Another major issue is the adoption of a roadmap for the implementation of the "new" definition of the second with two main deadlines:

To find out more about the resolutions adopted