The new International System of Units is adopted 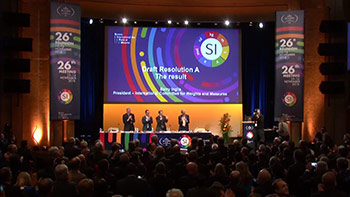 The 60 member states of the Metre Convention voted unanimously on Friday, November 16, 2018, to redefine the units of the International System of Units.

This vote is a historic event because for the first time since the signing of the Metre Convention in 1875, four units were redefined at the same time: the kilogram, the mole, the ampere and the kelvin. It also marks the end of the use of material artifacts for unit definition.

The metrology research work carried out at the LNE for many years has contributed to making these redefinitions possible, in particular with its watt balance for the redefinition of the kilogram and its work on ampere.